This duvet is top of our assortment line. Is has a delicious shell and the finest goose down inside.

The tale of the brave tinsoldier is heartbreaking and as a goodnight story perhaps better at delivering mournful than sweet thoughts and dreams.

The fairytale duvet, with goose down as light as paper dancers and soft fabric as fine as a paper castles, does its best to make your dreams sweet. Eventually the brave tinsoldier melted together with his love the paper dancer, into a beautiful tin heart.

The story of The Brave Tinsoldier who had only one leg, begins on a table. He was the last tin-soldier to be made and there hadn’t been any more tin left.

Yet he stood just as brave on his single leg as his brothers stood on two. There was also a paper castle on the table, revealing a beautiful ballerina who stood so beautiful and straight on tiptoe. The soldier could not take his eyes off her all night long, but in the morning, he fell off the windowsill where he was found by a couple of street urchins, who placed him into a boat made of paper.

The soldier remained brave, and neither the gutter’s darkness nor the water rats and the sewer’s waterfall could make him falter. He was swallowed by a fish, but the fish was caught and brought to the very same house the soldier originally came from. Barely had he returned to the living room when one of the boys in the house threw him into the fire. Shortly afterwards, a gust of wind blew the ballerina into the fire with him. She was consumed at once and left only a small, black spangle, whereas the tin soldier melted into the shape of a little tin heart. 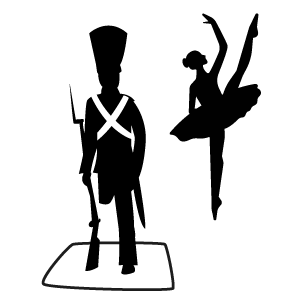